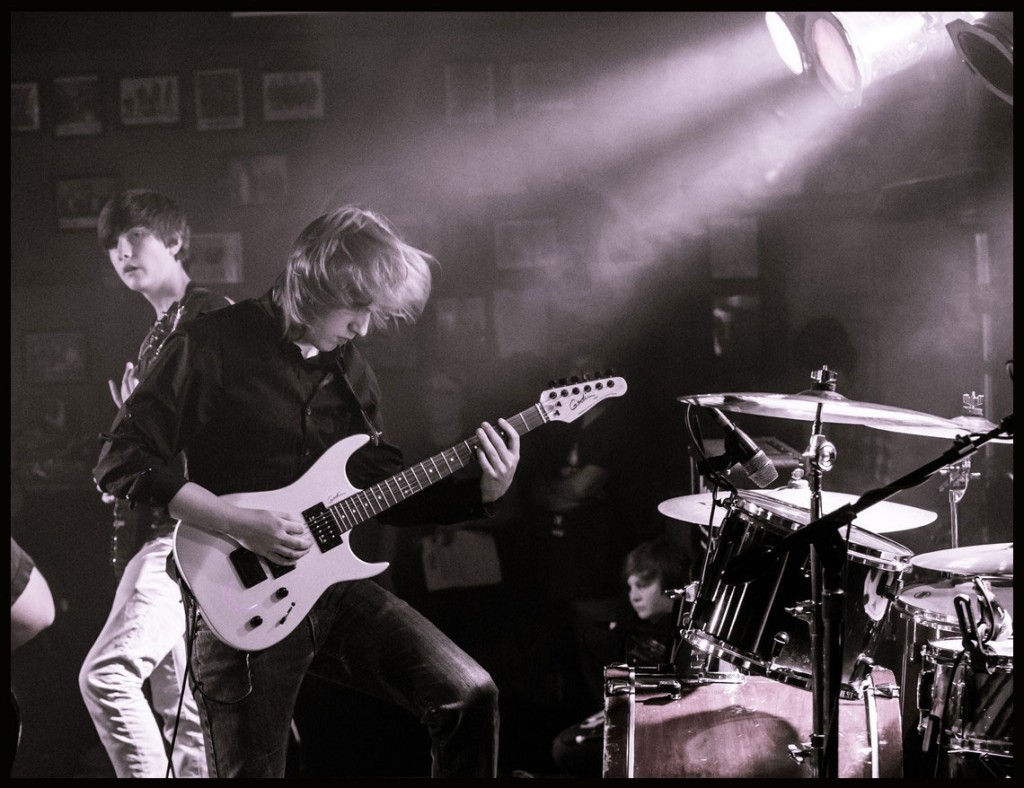 It takes a certain charm, on top of an unusual amount of talent, to create a young phenom. The kind that everyone from neighbors to schoolteachers to random faces in the crowd can’t help but open their heart to. Such seems to be the case with Walker Masuda. With light brown shoulder-length hair that would make any 1980s rocker jealous and an easy smile that could melt a stick of butter, it’s easy to see why this junior at Denver Online High School is drawing eyes- and that’s before you hear him play the guitar.

Walker started gigging in 7th Grade, doing classical performances through a program at school. “I went to Denver School of The Arts,” he says. “It is a school that has majors, and I was in the guitar major. We had a classical program and every quarter or so we’d have a classical recital.” While in the program he learned theory through jazz as well as classical music. Masuda is also a part of Littleton School of Rock, a program which combines weekly private music lessons and group band rehearsals to organically prepare its students for live performance. His band Steam Train, which gigs across town regularly, was formed through this program, and performs original music as well as covers. The group has music available for streaming via facebook.com/SteamTrain.

“I’ve been there for about two years,” Walker says. “I think it’s an awesome program. I started with their seasonal shows, where they do a themed show that has rehearsals that span a quarter of a year, or a few months at least, and then at the end they have a show. From there, I auditioned for their house band, which is the band that plays around locally to represent School of Rock.”

But that wasn’t enough. From there, Masuda auditioned for the School of Rock’s All-Stars program, which allowed him to perform at Lollapalooza in Chicago in 2013 as well as a festival in Vail and at the world famous Red Rocks Amphitheatre (which he has now taken the stage at more than once). “Red Rocks the first time was rough for me (as far as being nervous),” Walker says. “It was like, Whoa this is kinda unreal, it was a sold out crowd.”

For traditional schooling, Masuda stayed at Denver School of the Arts through 10th grade before moving to Denver Online High School. The online-school format allows Masuda to work his schedule around music. “I had my own band going on and I had School of Rock, and I felt like I needed more time to really push forward with my own interests in music,” he says. He heard about online schooling through friends at School of Rock.

Luckily for him, Mom and Dad are very supportive. “Walker’s dad and myself aren’t really musicians, so when Walker wanted to play guitar, we were very supportive, we love music, but we had no idea how far this would go,” says Walker’s mother Trisha Masuda. “We thought, Well, he’ll go to Denver School of The Arts and he’ll enjoy this, but we didn’t know where it would go. But when we put Walker in School of Rock, he just kind of took off with the level of performance that he’s able to do. He just progressed so quickly that we both realized that this is a life goal now. It’s not just something until he graduates high school.”

As can be imagined, watching their teenage son take the stage at Red Rocks and head to Chicago to play at a major music festival is a bit nerve-racking. “Definitely for me, I was at least as nervous as he was the first time he got up at Red Rocks,” says Trisha. “Even on a local stage, I think it was at Eck’s Saloon was the first time he got up at a real venue and I was so nervous I about died.” She has since calmed down a bit, after watching her son stick gig after gig. “Every time there’s a performance he just nails it, so I’m maybe only a little bit nervous now. It’s been a good learning curve for us.”

Walker’s favorite place to play is The Walnut Room because of the great sound and friendly people. When he’s not out gigging, Walker attends a homeroom session once a month at Denver Online High School, as well as ACT prep courses, but the rest of the schooling is done at home through online courses. Contrary to what many might think, however, online high school is no walk in the park.

“For him, this is a great option,” says Ian Jones, principal of Denver Online High School. “He’s able to capitalize on the flexibility in order to do what he needs to do with his music.” The school, which also is home to a number of skier/snowboarder students, competitive athletes, and kids on other paths that keep them out of traditional high schools, requires an equal time commitment from students as its traditional K-12 counterparts. “There is flexibility in the week, but the time commitment is similar to that of a brick and mortar high school. We typically look at between 25 and 40 hours per week of work. The beauty of it is that we’ve got seven days and there’s not that rigid schedule. These kids benefit, and Walker would be an example of that. The thing that is misunderstood is that it’s easy. Students often come to us thinking this is going to be an easier option, whereas it’s not easier, it’s just different.”

Following graduation, Walker will continue down his musical path. “I’m looking at the audio engineering program at UC Denver,” Walker says. He also plans do some studio session work as well as continuing to play with Steam Train. Catch him live at Herman’s Hideaway on November 5, and keep posted on other upcoming events on the world wide web.